Dominion has announced that it plans to pursue an alternative route for the ACP in response to Forest Service concerns about harm to protected species and habitats in the Cheat Mountain area of West Virginia and the Shenandoah Mountain area of Virginia. The change in plans addresses concerns about endemic salamanders, the West Virginia northern flying squirrel, and the red spruce ecosystem restoration area. Dominion spokesmen have stated they believe the alternate route will meet Forest Service requirements and provide a viable path forward for the project.

Dominion fails to recognize, however, that the real issue is construction of a major pipeline through the greatest concentration of remaining wild lands, pristine streams, and intact ecosystems in the central Appalachian region.

Although the newly proposed route would reduce impacts to certain species that are emblematic of this wild landscape, Dominion’s alternate route still involves significant forest fragmentation and fails to avoid environmental harm associated with construction across steep mountains and complex karst valleys. Moreover, Dominion is now proposing to build the pipeline along a path that was initially rejected for being too challenging and hazardous.

The proposed ACP is unprecedented with respect to pipeline size and the level of disturbance that will be required. There is no acceptable route for the ACP through the central Appalachian region.

Statement of the Allegheny-Blue Ridge Alliance on the newly announced route change for the Atlantic Coast Pipeline:  February 12, 2016

The new alternative route for the Atlantic Coast Pipeline, announced this morning by Dominion Transmission, avoids Cheat and Shenandoah Mountains but compounds the ecological harm that would ensue. By directing the pipeline further south in Pocahontas County, WV, into northern Bath County, VA and then north through the Deerfield Valley in Augusta County, the route would traverse some of the most concentrated karst topography in the Allegheny region. A pipeline through this area would significantly increase the likelihood of catastrophic erosion and sediment pollution of several significant waterways. Furthermore, the new route opens up to potential devastation a whole new set of cultural and natural resources. The many newly affected landowners and local officials must be carefully consulted before the project should be allowed to continue with the FERC process.

Once again, Dominion has proposed a route without thinking through or understanding the environmental and other consequences of its decision. 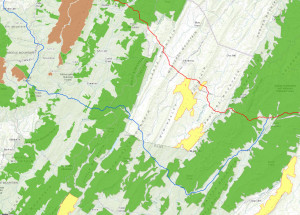 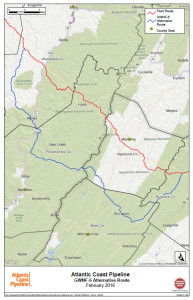 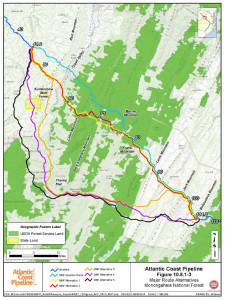 The currently proposed alternative route would be located in the same Thorny Flats area south of Cheat and Back Allegheny Mountains as the ACP route alternatives designated MNF 3, 4, and 5. Dominion argued against those routes due to the presence of additional karst (compared to other routes) and rugged terrain that would create problems during construction and difficulties with slope restoration and stabilization. The above map and following excerpts are from Resource Report 10, submitted by Dominion in September 2015 to FERC. Beginning on page 10-88: . . . disadvantages and challenges associated with MNF 3, 4, and 5. First and foremost is the difficulty of the terrain crossed by these routes, particularly in the areas west, south, and east of Snowshoe/Thorny Flats . . . . Of particular significance along the southern routes is the jumbled arrangement of ridgetops in the area surrounding Thorny Flats. The mountain ridges in this area generally run in a north/south direction (the AP-1 mainline trends northwest to southeast) or have no primary orientation and consist of a jumbled mass of peaks and ridge tops. . . . Crossing this terrain with a 42-inch-diameter pipeline while attempting to minimize or avoid traversing steep side slopes would result in multiple, steeply graded, up-and-down approaches to ridgetops that would in many instances require heavy equipment winching on both sides of the ridge from single or multiple staging areas on the ridge top. . . . Because of the narrowness and remoteness of the ridgetops, most of these areas would require the construction of a graded winching platform on top of the ridge, and depending on the slope, could require construction of an access road along the ridge to access the winch platform for delivery of construction equipment and pipe sections. Access to the remote areas crossed by the three southern alternative routes would be difficult due to the lack of existing nearby roads. . . , which could require the construction of new roads into these areas. Slope restoration and stabilization would also be difficult to achieve in many of the steep areas crossed . . . .