Examination of the Columbia Gas of Virginia pipeline project over Peters Mountain in Giles County is informative with respect to both careless pipeline construction practices and regulatory system failure. It was thus surprising to see the recent op-ed piece by company spokesman, Robert Innes, who objects to our complaints about the project.

Why would he want to draw more attention to this project, which reflects so poorly on both Columbia Gas and the Virginia Department of Environmental Quality?

The following is provided in  response to Mr. Innes op-ed. Note that Mr. Innes addressed only one of the problems with the pipeline project in question.

Major elements of the complaint and summary of DEQ responses

DEQ:  “. . .  it may not be practicable to construct WIDs in a manner consistent with the design standard, due to topographical constraints. . . . the on-site location may need to be adjusted to meet field conditions in order to utilize the most suitable outlet.”

Note: WID’s are runoff water interceptor diversions. Our observations indicate that few if any WIDs were in place during the construction phase of the project, nor were they installed properly post construction.

DEQ:  “. . .  a topographic low point, near station 160+00 is not identified on the USGS map, nor is it identified in the 5 ft contours of the erosion and sediment control plan prepared by the Townes Site Engineering.”

Note: No one identified the sinkhole that is now receiving the channeled discharge from the pipeline corridor. DEQ would have seen the sinkhole if it had inspected the project site prior to or during construction.

(3) CGV failed to preserve watershed hydrologic function through development and implementation of a stormwater management plan.

DEQ:  “. . . the project narrative describes the 80-125 ft wide clearing returning to a 40-50 ft clearing within the easement . . .  increased from the existing 20-30 ft width. . . significant change in runoff is not anticipated. . . stormwater runoff down the north-facing slope of Peters Mountain is expected to have similar hydrologic characteristics as before the installation of the new pipeline.”

Note:  An objective analysis would not conclude that post-clearing, post-construction runoff on a mountainside with 40%+ slopes would be the same as prior to construction. An actual data-based analysis is required —and is required for other construction projects, which are also required to install stormwater management structures to ensure compliance with storm water management regulations. DEQ simply does not apply the regulations to pipeline projects.

Note: The MVP would cross the same mountain, the same karst terrain, and a recharge area for the same public water system as the Columbia Gas project.

Since DEQ assumed the state’s erosion and sediment control program in 2013, there have been 9 requests for variances ranging from 600 feet to 15 miles (average =  2.3 miles). DEQ approved them all. Dominion officials have stated that the ACP will  require variances allowing mile-long open trenches – – that they can’t build the pipeline otherwise. The trenches will be 8-12 feet deep and 20-30 feet wide.

Despite state laws and regulations that are supposed to be protective of water resources, citizens have no assurance that these laws and regulations will be implemented. This is alarming, given the unprecedented scale of the the proposed MVP and ACP pipelines. DEQ Director, David Paylor, is ultimately responsible.

Dereliction of duty is defined as “the shameful failure to fulfill one’s obligations.”

So far, the definition fits.

From Previous Posts About the Columbia Gas Pipeline 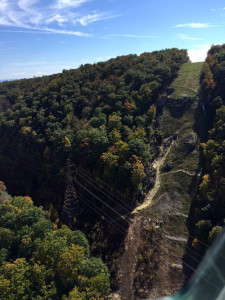 Slope failure, western side of Peters Mountain, Jefferson National Forest, October 8, 2015. This is the photo that Columbia Gas of Virginia characterizes as misleading.  Click on the image for a larger version. 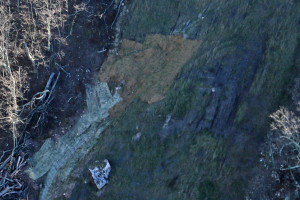 Close-up view of above slope failure area after "repair," showing the repeatedly applied patchwork of erosion control fabric. Click on the image for an annotated version. 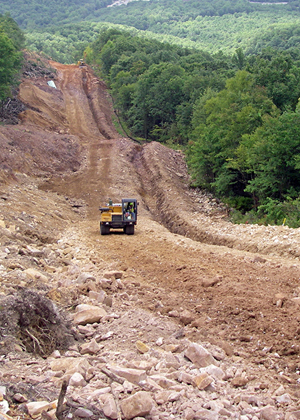 Columbia Gas pipeline during construction. Note that this is a 12-inch pipeline project. The proposed 42-inch ACP and MVP pipelines would require far more excavation and would cross much more of the same problematic terrain. Click on the image for a larger version.

Peterstown in Monroe County, WV, with Peters Mountain and the Columbia Gas pipeline corridor in the background. The town's water treatment plant was offline for over two weeks in July of 2015 after diesel fuel that was spilled at a pipeline staging area entered the karst recharge system. Click on the image for an annotated version. 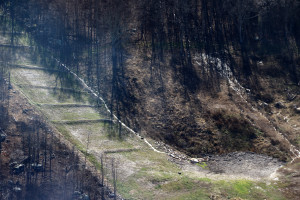 Downslope discharge from the pipeline corridor flowing into a sinkhole at the foot of Peters Mountain.  A diesel spill at or adjacent this sinkhole contaminated the Peterstown water supply in the summer of 2015. Click on the image for an annotated version.