On May 15, 2017, the Dominion Pipeline Monitoring Coalition (DPMC) sent a letter to David Paylor, Director of the Virginia Department of Environmental Quality (DEQ), describing some of the information that companies proposing the Mountain Valley Pipeline (MVP) and the Atlantic Coast Pipeline (ACP) must submit with applications for Clean Water Act and state law approvals. If the pipeline companies fail or refuse to provide all information necessary to assess the entire range of water quality impacts the pipelines could cause, including those specifically described in DPMC’s letter, then the DEQ cannot go forward with regulatory reviews of the proposals. 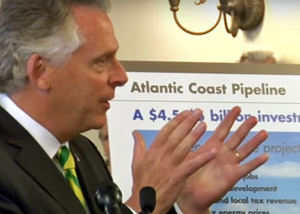 DPMC expressed its appreciation for DEQ’s decision to conduct individual reviews for each of these major pipeline proposals pursuant to the State’s authority under Clean Water Act section 401 and Virginia law to issue or deny Water Quality Certifications (WQCs). In addition, DPMC stated that “comments by Virginia agencies provide excellent descriptions of data and studies necessary to prevent water quality damages from the activities that would be allowed under the Federal Energy Regulatory Commission’s (“FERC”) and U.S. Army Corps of Engineers’ approvals, if granted.”

In the letter, DPMC points out that there are “gross deficiencies” in submittals by the pipeline companies as part of the National Environmental Policy Act (NEPA) reviews being led by the Federal Energy Regulatory Commission (FERC). These serious deficiencies, include those identified by DEQ, the U.S. Forest Service, and citizens. However, in describing some of the data needs in comments to FERC, the State of Virginia has merely suggested or recommended that FERC require the gaps be filled. This approach is not sufficient. DPMC explained:

[A]s you know, the State has separate and independent legal duties it must meet in each case, regardless of FERC’s actions. DEQ may not abdicate its responsibilities or defer to FERC in these matters. . . .

It is now time for DEQ to incorporate its information requests and requests for information cited by other parties into the State’s regulatory process and deem them requirements that must be met before WQC applications can be declared complete.

Just a few of the types of information not yet provided for either pipeline include:

The pipeline companies have not provided the information necessary to show the real damages these proposals would cause to our state waters and FERC refuses to require them to do so, because neither FERC nor the companies want the public to know the truth until after approvals are given and the destruction begins. But DEQ cannot let the companies and the federal bureaucrats bully them into accepting incomplete data. The State of Virginia has promised to conduct thorough and public reviews and fully protect our resources. The agency’s insistence on complete and accurate applications will give us the first indicator as to whether it plans to keep that promise.