The Corps is in the five-year renewal cycle for the Nationwide permits, which are adopted at the national level. Once the permits are in place, development interests are entitled to apply for coverage under the permit that applies to the development activity. The Corps has a Nationwide permit for utility construction projects, NWP 12. Gas pipeline developers can submit requests for gas pipeline construction projects to be regulated under the pre-determined NWP 12.

NWP 12 is scheduled to be renewed by March 2017. The National Environmental Policy Act requires the Corps to conduct an environmental impact analysis on the proposal to renew the permit, and involve the public in the decision making process. On August 1, 2016, the DPMC submitted comments to the Corps that addressed the legality of the Corps’ proposal to reissue the NWP 12.

The primary issue raised by the DPMC is the fact that the Corps must analyze whether mitigation for stream crossings and wetland impacts is effective. We argue that the NWP 12 was created long before 42-inch gas pipelines were proposed to be constructed through the rugged terrain of the mid-Atlantic mountain region. With this reissuance, the Corps is obligated to prove that mitigation measures that would be required under the permit actually work. However, the Corps has not done any analysis of the effectiveness of mitigation measures on the steep slopes, unstable soils, landslide prone conditions, and karst geology that dominate this mountain region. Even though the Corps’ jurisdiction lies in the streams and wetlands, slope instability can cause soils to flow downhill and overwhelm any mitigations over which the Corps has jurisdiction.

The DPMC’s work that reveals the conditions on pipeline construction projects supports our argument that the Corps should exclude gas pipeline construction projects in the mid-Atlantic mountain region from coverage under the NWP 12. Instead of coverage under the NWP 12, gas pipeline developers should be required to apply for an individual permit. Unlike the NWP 12, the application process for the individual permit would require project-specific mitigation analysis, and give the public an opportunity to review and comment on mitigation proposals.

The Commonwealth of Virginia also has a role to play in the impacts that gas pipelines cause at stream and wetland crossings. Nevertheless, the Virginia DEQ has already said that it would not require anything more from a gas pipeline developer if the Corps decides that the project can be covered under the NWP 12. Therefore, if the Corps authorizes coverage under the NWP 12, the Commonwealth also would not require any analysis of the effectiveness of mitigation measures: a lose/lose scenario for the water quality of the mid-Atlantic region.

Consent order against Dominion Transmission, Inc for a series of water pollution violations on West Virginia pipeline construction projects in 2012-13. The violations included failure to report noncompliance, slope failure and sedimentation at 17 locations, a pipeline break releasing crude oil into a stream, and groundwater contamination at a compressor station. Dominion prepared a geotechnical report on the causes of the slope failures or landslides, admitting that industry-standard Best Management Practices failed due to steep slopes and slip-prone terrain, supporting our argument that mitigation measures must be evaluated in environmental reviews and permitting decisions. 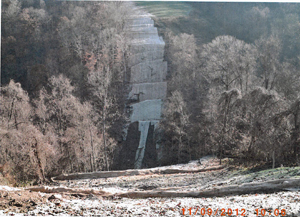 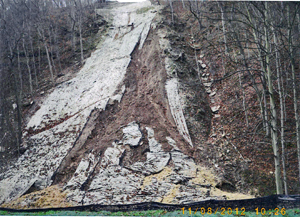