The Dominion Pipeline Monitoring Coalition has objected to a Virginia Department of Environmental Quality (DEQ) proposal to issue a “Water Quality Certification” (WQC) that would give free rein to parties proposing to rip and blast through Virginia streams and wetlands to build utility lines. The DEQ has not conducted the required legal analyses and cannot validly claim that state water quality standards will be upheld by the activities it proposes to certify.

The DEQ’s proposed WQC would allow parties to build utility lines that cross through streams and wetlands across Virginia, as long as those projects are expected to meet the conditions in a U.S. Army Corps of Engineers’ “Nationwide” permit.” That Nationwide permit (NWP 12) imposes generalized requirements for waterbody crossings throughout the United States. 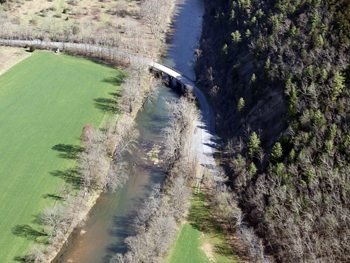 The state’s certification is supposed to be granted for such Nationwide permits only if the DEQ can ensure that all Virginia water quality standards will be met. However, those generalized conditions cannot anticipate and protect the great variety of waters that would be affected across the state, and the Corps flatly admits that aquatic life and recreational uses will be damaged or eliminated, sometimes for years and sometimes permanently, even if NWP 12’s requirements are met. These damages cannot be allowed under Virginia’s water quality standards.

Most alarming is the fact that the DEQ performed no analysis to look at the impacts of NWP 12 activities on water quality standards. The DPMC demanded all supporting documentation for the DEQ’s proposed regulatory action and received 5 documents that show that no analysis was even attempted, let alone completed.

The utility lines that would be covered under this proposed WQC include pipelines for water, oil, natural gas, as well as other types of utility lines and the size, complexity, and reach of these lines could range from very minor projects, with one small-diameter line crossing just one stream, to projects that cross many waterbodies and involve huge disruption of those waters. To adequately address the risks posed by this range of actions, the WQC would need to address the many sensitive aquatic environments that might be affected and protect them all.

A one-size-fits-all approach, such as that embodied by DEQ’s proposed WQC is reckless.

The DEQ has suggested that it may attempt to cover the Mountain Valley and Atlantic Coast Pipelines under this WQC if the Corps of Engineers deems them eligible for coverage under NWP 12. Both actions, by the DEQ and the Corps, are illegal and we will oppose them. We hope that the DEQ decides against this unwise and unsound course for regulation of the MVP and ACP projects. However, even if these enormous projects are not covered under this general WQC, this proposal cannot be justified on legal or scientific grounds for the many remaining circumstances where it may be applied.

Comments should be submitted to: Steven.Hardwick@deq.virginia.gov and the deadline is this Friday, March 17, 2017 by 11:59 p.m.