On April 23, 2018, the DPMC sent a letter asking Governor Ralph Northam to order the Department of Environmental Quality (DEQ) to carry out the commands of the Virginia State Water Control Board (Board) to ensure additional and necessary reviews and protections for destructive pipeline proposals.

The Board ordered DEQ to issue a public notice and gather comments on the need for individual waterbody crossing analyses for both the Atlantic Coast Pipeline (ACP) and the Mountain Valley Pipeline (MVP) but the Department has so far failed to comply. In addition, DEQ leaders have declared that the Board and the public will have no further role in review of the ACP proposal, in direct contradiction to the wording of the certification the Board issued and the clear intent members of the Board expressed. 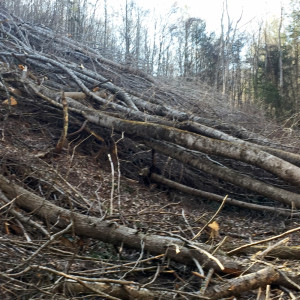 Timber felling for the ACP corridor in the National Forest. The DPMC is concerned that the DEQ will allow construction to proceed without providing an opportunity for further review by the State Water Control Board and the public.

DEQ’s failure to respond in a timely fashion to the command to initiate a public comment period, which is so vital to prevent extreme and irreparable damages to our waters and our communities, is inexcusable. DEQ’s task is simple and the Board’s order was clear: announce a 30-day comment period in which the public can provide evidence as to whether the U.S. Army Corps of Engineers Nationwide Permit can ensure Virginia water quality standards will be met, if the pipeline companies are allowed to rip and blast through sensitive and highly valued streams and wetlands. To accompany the notice, it is imperative that DEQ provide information as to the bases for DEQ’s resistance to individual reviews, to help inform the public’s comments.

As stated in the DPMC letter, written by DPMC’s David Sligh, “what’s the holdup?” To translate the Board’s intent into a simple public notice should have been the work of hours not weeks. And any information that informed DEQ’s previous decision, to rely on the Corps’ rubber stamp approvals rather than conducting its own regulatory review, must, presumably, be close at hand and ready to disclose to the public.

In fact, that DEQ has yet to provide such detailed proof to the Board and other citizens is, in itself, a departure from the usual course followed when the State makes regulatory decisions. Those decisions are always to be based on credible data and reasoned analysis and the initial burden is on DEQ to justify its decisions – a burden that then passes to the Board, for which it is unprepared when DEQ fails to provide the complete and accurate story.

What we have now are general statements and unsupported assurances from DEQ that all will be well, that we can safely defer state authorities and trust the Corps. As noted in the letter, that’s just not good enough. “Any grade school student will be familiar with the command to “show your work,” not to simply offer answers without a proper explanation for the results given.” Should DEQ be held to a lesser standard than school kids?

Also addressed in the letter is DEQ’s proclamation that it intends to ignore the Board’s order, that the Board will “have a chance to ‘consider further actions on the [ACP] Certification following the review of the DEQ report” and that the public’s comments will be available to the Board when it makes its decision. DEQ Director Paylor attempted to justify this stance with an incomplete and unsound legal justification. In essence, Mr. Paylor told the Board the ACP certification exceeded the Board’s authority and that he was prepared to act on his opinions, not those expressed by the Board in the plain language of its approval and the extensive discussion that supported that approval.

The DPMC letter concludes:
“We ask that the public notice ordered by the Board be issued immediately and be accompanied by all records DEQ has relied upon. Also, we trust that you will order DEQ to abide by the Board’s order that further process be conducted for the upland certification for ACP.”

We anxiously await the Governor’s response and the required DEQ action.