David Paylor, Director of the Department of Environmental Quality, claimed in a recent letter to conservation groups that a blanket permit issued for waterbody crossings by the U.S. Army Corps of Engineers “will protect water quality at each site.”  Mr. Paylor said his conclusion is based on DEQ’s “experience observing linear projects constructed under NWP 12.” (see Paylor letter)

However, DEQ’s response to a public records request directly contradicts Mr. Paylor’s claim. The Department, by its admission, has no records that reflect its “experience observing linear projects constructed under NWP 12.”

It would seem a safe assumption that DEQ would have looked at the record of performance on previous projects to see if the requirements in the Corps permit will also uphold Virginia’s water quality standards. After all, that’s a pretty standard practice – scientists look at actual results, when they’re available, before presuming to make predictions about what might happen in the future.

Given the administration’s constant promises, that decisions about the fates of the Mountain Valley and Atlantic Coast pipeline projects will be firmly based in science, we are dismayed to find that the Department has apparently not bothered to investigate whether past NWP 12 compliance has led to compliance with state requirements as well. 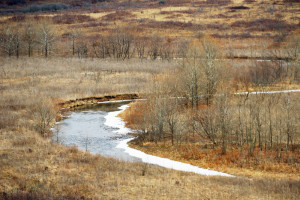 In the path of the ACP. The Jackson River is one of the best of Virginia’s remaining trout streams. January 2018 photo.

• Any data or other information collected or reviewed by DEQ with the purpose and intent to assess whether activities that have previously been covered by and were in compliance with U.S. Army Corps of Engineers Nationwide Permit number 12 (NWP 12) and regional conditions associated with NWP 12 can meet or have met Virginia water quality standards. These records should cover the period between February 15, 2017 and the date of this letter. (We limited this request to the period since February 2017, because we’d already sought the same information then and come up empty.)

• Any analysis or discussion of data or information as described above.

DEQ’s response: “The agency has no records regarding your . . . request.” (see DEQ email)

So, to be clear – we asked for any records showing that DEQ had “collected or reviewed information” on projects previously covered by the Corps’ NWP 12 permit and whether DEQ personnel had analyzed or even discussed such information before the Department decided to defer to the Corps’ permit and claim it also met state requirements. The DEQ said there were no such records.

In a recent interview, Governor Ralph Northam addressed the need for individual state assessments of possible impacts where Virginia streams and wetlands could be crossed by the Mountain Valley and Atlantic Coast pipelines. A reporter at WTOP studios recently asked the Governor: “[a]s far as you’re concerned, the environmental studies that need to be done have been done?” The Governor answered “yes.” He asserted: “We’re using science. . . . We’re doing everything that we can to make this environmentally sound.” (link to video)

Governor Northam’s trust in DEQ’s use of science and the soundness of the process through which the MVP and ACP are being regulated is misplaced. We call on him, again, to live up to the commitments he has made. The Governor called for individual waterbody crossing reviews when he was running for office. He must now make sure those reviews occur.