The Dominion Pipeline Monitoring Coalition has issued a new report entitled The Agency Has No Records . . . DEQ’s Failure to Use Sound Science to Protect Virginian’s from Pipeline Threats.

The report describes Virginia DEQ’s responses to a series of records requests DPMC filed in the last two months to discover what evidence DEQ has to support its claims that a Corps of Engineers permit will protect Virginia waters where the Atlantic Coast Pipeline and the Mountain Valley Pipeline propose to dig and blast through streams and wetlands.

In nearly every case, DEQ was forced to admit it had no such records, showing that it has not applied the most basic scientific protocols to ensure these waterbody crossings can meet Virginia water quality standards. Administration officials have told the Governor, the State Water Control Board, and the public that it has conducted certain investigations and analyses. However, the results of our information requests refute those claims and show promises that Virginia is relying on science to make decisions have been empty.

As the report states:

Virginia officials have repeatedly insisted the state’s reviews of the Mountain Valley Pipeline (MVP) and the Atlantic Coast Pipeline (ACP) are based on science – that the Department of Environmental Quality (DEQ) has simply relied on facts. DEQ has claimed its experience, its investigations, and its analyses provide evidence that these two huge pipeline projects will uphold Virginia’s water quality standards in all cases where waterbody crossings are proposed.

Supposedly, those facts gathered by DEQ led the agency to conclude that the Corps of Engineers (Corps) Nationwide Permit Number 12 (NWP 12) is fully protective of Virginia’s waters, wherever that federal permit is applied to waterbody crossings by natural gas pipelines. However, DEQ cannot supply records to support its conclusions. And, without documentation of the facts and analyses, DEQ is left with mere claims. Claims without proof are not science.

Reviews of polluting projects should and generally do include:

DEQ says it applied these methods – the evidence says otherwise. 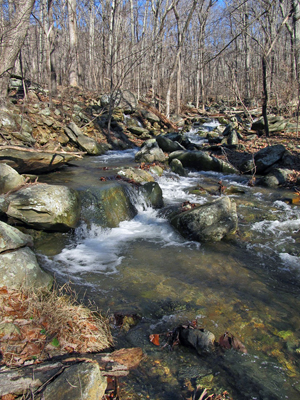 Dominion plans in-stream blasting for crossing the South Fork of the Rockfish River, a native trout stream in Nelson County.

One valid method used to predict environmental impacts from prospective actions is to look at the record of past events. Given that thousands of smaller utility line projects have been built in Virginia under the requirements of NWP 12, there must be abundant information for DEQ to assess and DEQ Director Paylor says they’ve done just that. However, when we asked for the proof, DEQ responded: “The agency has no records regarding your 4.16.18” FOIA request.

Another valid scientific approach to predict effects of projects in one area is to examine impacts in other jurisdictions where similar conditions exist. DEQ officials claimed to have done this but, again, when asked for the evidence could supply no records to prove its claim.

DEQ also had to admit it had “no records” when asked for proof it had made any individual assessments for a group of sixty-five proposed crossings.

The State Water Control Board is attempting to fulfill its duty, by seeking information about the degree to which NWP 12 may or may not protect state waters from damage caused by these pipelines. We sincerely ask that, in addition to its review of evidence provided by the public, the Board order DEQ to explain and fill the gaps in the record demonstrated by the findings from records requests described above. Then, individual certification reviews for crossings must be completed before MVP and ACP are allowed to invade and destroy our precious streams and wetlands.

Will the State of Virginia finally use science and restore the integrity of this regulatory system and the confidence of the public?

See the full report:  The Agency Has No Records . . . DEQ’s Failure to Use Sound Science to Protect Virginian’s from Pipeline Threats