The Dominion Pipeline Monitoring Coalition (DPMC) has learned that the Department of Environmental Quality (DEQ) is just now compiling the thousands of emails and other comments citizens submitted during the comment period that ended more than a month ago.

This outrageous foot-dragging fits a pattern DEQ has set for months and heightens the likelihood of further damage to state waters by the Mountain Valley Pipeline (MVP) and the Atlantic Coast Pipeline (ACP) before the State Water Control Board has the chance to rule on the sufficiency of waterbody crossing reviews. The Board saw a need for this information way back on April 12, based on concerns that a blanket permit from the Corps of Engineers may not be adequate to ensure Virginia’s water quality standards will be met.

On July 3, with no commitment from DEQ as to when the comments would be available to all, DPMC decided to acquire them and provide them online. We filed a records request on July 3, 2018, seeking copies of all comments sent to DEQ. The law requires the agency to provide records within five work-days or explain why it is not “practically possible” to do so in that time period. 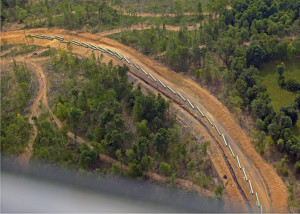 That deadline fell on July 11 and that day DEQ told us it would not get us the emails within the required time or tell us when it would be able to do so. They said the emails had not yet been compiled so they could be provided electronically, due to technical difficulties. We then insisted we be allowed to review the emails in person on DEQ’s computers and were told this too was not possible. We reiterated that the law required better and that we would not accept DEQ’s failure to comply.

Suddenly, just two days later on July 13, DEQ gave us more than 7,000 emails. Apparently, the technical difficulties that DEQ claimed may require more than two additional weeks to solve were now solved – but only under pressure from DPMC. Why had those difficulties not been tackled and solved in the three months since the Board ordered the public notice?

We and Wild Virginia will make all of the comments available online and publish a summary within the next week. Where the Department has failed, we will pick up the slack.

We call on the Board to use this information and hold a meeting well before the currently-advertised date of August 21st and on Governor Northam to order DEQ to now move quickly to do its job. The repeated promises of transparency and sound science by administration officials have not been kept. It is now time for our officials to restore integrity to this process.